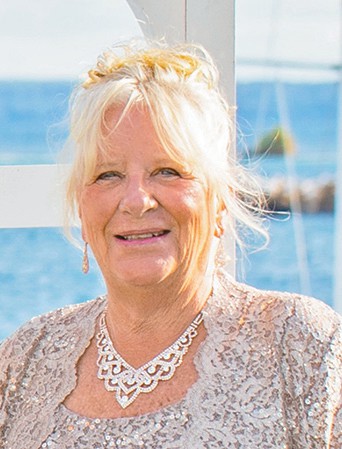 Cynthia Sue Cawthorne, of Mackinac Island and East Lansing, passed away Friday, September 2, 2002, after a sudden and unexpected two-day illness. She passed at Munson Hospital, Traverse City, after being air-lifted from Mackinac Island. She was 73 years old.

Mrs. Cawthorne was born April 11, 1949, in Hart to William J. and Hazel Margaret (nee Field) Knoth, of Shelby. She was graduated cosalutatorian from Shelby high school and attended college at Whitewater State in Wisconsin and Graceland College. She was graduated from Drake University in Des Moines, Iowa.

She loved children and was employed as an elementary school teacher in Shelby and Fowlerville.

She married Dennis O. Cawthorne, then a state legislator, at Ste. Anne’s Church on Mackinac Island August 21, 1976. Together, they travelled to many countries in North, South, and Central America, Europe, and the South Pacific, and met three U.S. presidents.

Mrs. Cawthorne is survived by her husband of 46 years, Dennis; her two adoring sons, Brevin of Mackinac Island and Caledonia and Chase of East Lansing; five grandchildren, Kaden, Tyler, Chloe, Jayce, and Ellie of Caledonia, all of whom were at her bedside the day before her passing; very special daughters-in-law; a sister, Beth Buyce, of West Olive, and numerous nieces, nephews, and cousins.

She was preceded in death by her brother Bill Knoth Jr., sister Kathy Green, and brother-in-law Roger Green, all within the last year.

Mrs. Cawthorne was well known in the Mackinac Island community for her closeness and devotion to her grandchildren. Family was the centerpiece of her life.

A funeral will be held Monday, September 12, at 11 a.m. at Ste. Anne’s Catholic Church on Mackinac Island. Burial will follow at Ste. Anne’s cemetery.

A reception for family and all friends will then be held beginning at 1:30 p.m. at the Village Inn on Hoban Street. She helped design, build, and decorate the restaurant in 1980-81.