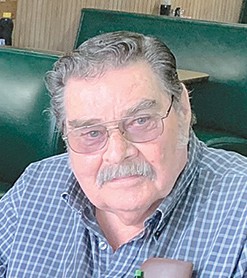 James “Jim” Francis Roe passed away Thursday, September 1, 2022, at the age of 83 in his hometown of Summerfield, Florida, following a long battle with serious medical issues. He faced life’s challenges with a smile.

He stayed strong until the end and died a peaceful hero, said family members, and his loving heart left a beacon of light for all who survive him.

Mr. Roe worked most of his adult life as a heavy equipment operator and later in insurance sales and as a real estate broker. He had a great admiration for Asian buffets and tomatoes, carrots, and potatoes.

His cheerful attitude and bright smile will be missed at Pickford High School Class of 1957 reunions, where he was tagged as the popular impersonator of Elvis Presley. The family said he was a good Christian man and a strong believer of God. He was an active member of Wings of Faith Fellowship Church in Ocala, Florida.

Mr. Roe is survived by his wife, Lucy; three sons and their families, Jim and Sandy of Mackinac Island, Steve of Menominee, and Chris of St. Ignace; two brothers and their families, Roger and Pat of Sault Ste. Marie and Francis “Frank” and Jean of Summerfield, Florida; nine grandchildren and 14 great-grandchildren; and a yappy little pug dog named Pretty Boy.

Mr. Roe was preceded in death by his parents.

A memorial service was held at Wings of Faith Fellowship Church in Ocala.

Memorial donations may be made to Wings of Faith Fellowship Church.