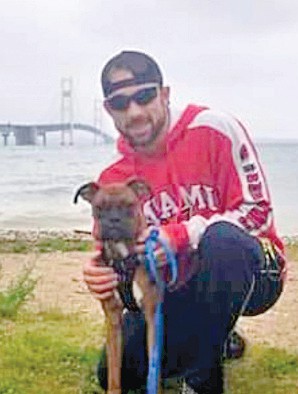 Mr. Davis was a talented sommelier and chef who was employed by several restaurants. He spent five summers on Mackinac Island, where he worked at The Yankee Rebel Tavern and Horn’s Bar. He was a 2008 graduate of Pinkney High School, an avid outdoorsman who could be found hunting, fishing, kayaking, and running, along with many other activities.

He is survived by his parents, Robert and Amber Davis, and Dana and Paul Snyder; siblings and their families, Jenna Davis and Richard Stolz, Aiden Bradbury, Ellie Snyder, and Aiden Lutz; grandparents Diane Davis, Diane Wolf, Calmer and Brenda Stordahl, and Paula Snyder. He is also survived by his nephew, Kohen Stolz, several aunts, uncles, cousins, and other adopted family members, as well as his beloved dog, Sam.

He was preceded in death by his grandfathers, Wayne Wolf and Robert Davis, Sr.

Memorials may be made to a Go Fund Me campaign, at gofund. me/af6b16a8, to help his family cover the cost of arrangements and purchase a memorial bench on Mackinac Island.